Within the Fit Chicks! program, we focus equally on fitness, nutrition and well-being. In fact, before a woman is invited to enroll, we give her a 14-Day Free Trial Membership and spend about another hour understanding her goals and methodically walking through our 3-Part Program. We go into great detail explaining the importance of lean muscles, metabolism and body composition (or body fat percentage).

However, THAT CONVERSATION GOES OUT THE WINDOW if she believe she’s not “losing weight fast enough.” So, I think I need someone else to give you a perspective on the SCALE and weight loss. So, I googled “fitness and body fat” and this is what I found!

Trigger warning: As I got deep into writing this, I realized that there’s very frank talk about body fat and leanness in this post. I know that many people come here because they’re healing from different mental health and body image challenges, and I respect and value that enough to forewarn you that the conversation, though it encourages you to eat and nourish your body in a healthy and plentiful way, some of the language used here could be cause for concern. Please take care of yourself in the most responsible way possible, and if that means skipping this post, I encourage you to do so. <3

When I listen to people talk about weight loss goals, a lot of times, what I hear is disappointment.

“Oh, the training plan my coach gave me isn’t making the scale move.”

“Erika, lifting is making the scale go up, and I’m not ’bout that life!”

And, sometimes, as a trainer, I just have to shake my head and lead that horse to water, knowing that they might not be thirsty enough to drink yet.

Alas, it’s always this person that piques my interests the most:

“Erika, I reached my number goal, but I don’t look anything like how I’d imagine!”

This is the horse that is in dire need of that water. This is the person most ready to accept that it’s time to let go of the scale and embrace the life of body fat percentage, not the scale.

Why? Well, I’ve got five full reasons why:

As you’ll notice, the appearance of muscle is in direct correlation to the amount of fat absent on the body.

[Regardless of whether or not I like the following terms,] The lower in body fat percentage you get, the less likely you are to see things that contribute to most “problems” women find themselves “concerned” with – cellulite, muffin tops, larger arms – because the issue is usually fat distribution, not muscle distribution. You can be just about any weight you like, but a high body fat percentage is still a high body fat percentage.(You know what else I love about this chart? It shows why and how lifting weights doesn’t turn you into a competitive bodybuilder. I can assure you, the things that a woman has to do in order to get down to 10% body fat are things that are unfathomable to the average woman.)

2) Your regular weight on the scale tells you nothing. Body fat percentage gives you qualitative understanding of what you’re losing and why. When you step on a scale, you’re getting a mass total of everything – undigested food, digested food that you haven’t expelled yet (not to be crass, just sayin’), liquids you’ve drank that haven’t been — well, you get the picture, water weight you’re holding onto because of bloating, and more. If you lose seven pounds because you went to the bathroom after you reeeeeally had to go, is that really a victory? For some of us in certain situations, it might be, but many of us would prefer to lose seven pounds of pure body fat. Keeping tabs on your body fat percentage instead of focusing on your weight gives you a qualitative understanding of what’s happening inside your body – are you losing muscle? Okay, it might be time to turn down some of the cardio. Are you gaining body fat? Maybe it’s time to shift something in my daily diet. Did I gain a bunch of water weight? It might be time for my cycle to come. Let me get the heating pad on deck.

See all that knowledge? That’s where the real winning happens, here. 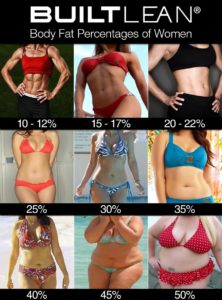 3) Most people I encounter are most interested in appearing to be leaner. Using only a scale to determine your progress in achieving that actually runs counter to your goal. Pardon my language, but… as a trainer, one of the things I hear the most is that people do “all this work” only to lose “all this weight” and still be, ahem, “flabby.” Or, the people who complain about how “losing weight means losing booty.” Well, if all you’re doing is shrinking down, you likely lost a vast majority of what would give you the more solid figure you might be after. In the absence of well-developed muscle, body fat remains present. A focus on losing that and building muscle leaves you with the more solid physique. And, as evidenced by the chart above, that physique doesn’t have to be the competitive bodybuilder physique to get you where you want to go.
4) Body fat percentage is a better determinant of how successful you will be at weight maintenance. One of the reasons why yo-yo dieting happens, resulting in millions of miserable women, is because of the way they opt to lose weight. As women shrink down, irrespective of losing either fat or muscle or whatever, so goes their metabolism. However – because muscle is more metabolically active than fat, when you lose muscle, you lose way more of your metabolism than you would with merely losing fat. Like I said in this week’s Q&A Wednesday – body fat percentage makes the difference between a woman happily fitting in 3 filling meals at 1900 calories a day, and 1300 calories a day.

Don’t get me wrong – there are women out there who naturally eat that little and are fine. The difference between the two is the fact that the woman who is losing weight and gets down to a point where her metabolism rests at 1300 likely has habits that must be dealt with and, when they aren’t, weight gain will naturally occur, followed by shame and embarrassment, followed by (possible) binge eating, and then the cycle begins anew… except, this time, with a bit less self-confidence going in.

Just like losing muscle greatly depletes your metabolism, adding muscle vastly improves it. Adding 10 pounds of muscle, for some women, could be a decrease of 5% in their body fat percentage and an increase of a few hundred [kilo]calories with regard to metabolism. Ten pounds. That’s it.

Working on body fat percentage is freeing. Why? Because you have to eat in order to successfully alter it. So many different resources tell women that they have to starve themselves and kill themselves at cardio in order to achieve weight loss success, but starvation actually only increases your body fat percentage because starving a body only results in that body eating its own muscle to survive. That’s counterintuitive to your goal.

Why does all this even matter, Erika? Getting “smaller” is still “getting smaller,” right? Not quite.

You can focus on the scale and work on reducing your weight by any means necessary, or you can take a more balanced approach using your body fat percentage, which requires you to actually eat, actually do something other than cardio, and invest in fitness that improves you quality of life, not just shrinks your waistline. 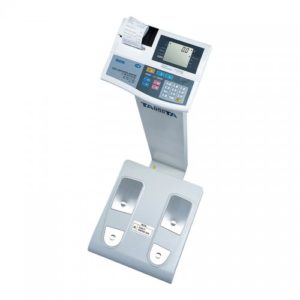 Whereas other important things like your internal organs are also made of muscle (and these are things you are minimally likely to alter with strength training), your actual muscular system is what you control when it comes to improving your metabolism as well as your quality of life.

Measuring your body fat percentage is most accurate when done through a hydrostatic scale – basically, being dunked in a creepy water pool where little things electronically feel you up and a Bod Pod Machine, found in sport medicine facilities. The next most accurate are the calipers, but you can’t use those on yourself and expect accurate numbers. Your body shifts and moves when you shift and move – surprise, I know – but this makes it difficult to grab a hold of any skin to take measurements. The most accurate thing you can consider for home use is an electronic scale that gives you a reading of your muscle %, body fat percentage, and (sometimes) water content. You’ll input some variables into your scale – height, age, activity level – and it’ll give you the majority of the rest. Here’sthe scale I use. In the studio we use the incredibly accurate Tania TP300 with thermal tape for easily tracking each client’s progress.

Ultimately, this encourages a shift in how you care for your body. You can’t healthily alter your body fat percentage in your favor without eating well, sleeping well, training hard, staying committed, and getting very in tune with yourself – all things that conventional wisdom tend to throw by the wayside.

“Time to throw conventional wisdom by the wayside. Who’s with me?” ask Erika

About the Author: Erika Nicole Kendall

The proud leader of the #bgg2wlarmy, Erika Nicole Kendall writes health, fitness, nutrition, body image and beauty, and more here at #bgg2wl. After losing over 150lbs, Kendall became a personal trainer certified in fitness nutrition, women’s fitness, and weight loss from the National Academy of Sports Medicine, and crtified in sports nutrition by Precision Nutrition. She now lives in New York with her husband and children, and is working on her 6th and 7th certifications because lol why not.